The ImagiNation – A Concept for a Country

The first step for the process of creating a new country is reviewing the past. After extensive review of ways countries were created, taking into consideration all external and internal, (individual and collective) factors, the collective known and unknown has established guidelines for a new way of living.

To do this, certain steps must be taken first. With the help of WikiHow we learned “How To Start A Country”.

In the past, the nation state represented:

In the past, countries were attained in the following ways:

Once that is done, the country must be built. Ways to do this included:

The concept of ImagiNation is based on an anti-country, anti-religion, and anti-corporate sentiments first expressed by John Lennon in his song ‘Imagine’ (1971). Further fieldwork and historical research has confirmed that, although borders of financial and ideological social groupings create a feeling of shared interests, they also create separation and disconnection from others.

We propose a nation of the world that has no rules, no borders, no currency, and no ideologies that represent the whole. Each person will be given statehood, become a territory onto themselves and part of the ImagiNation.

The ImagiNation will establish itself through the process as outlined by WikiHow. Each territory (individual) will be responsible for the following:

The territories write their individual ImagiNation charter. Each territory (person) will establish their own set of rules and laws. Here is an example of a charter by a territory:

The ImagiNation logo is a blank box. Inside the blank box each territory (person) will be responsible for creating their identification. The logo can be any shape or size. Here is one example template:

This will apply to all marketing materials. Each territory will be given blank cloth and blank materials necessary to create their own flag. Here is an example: 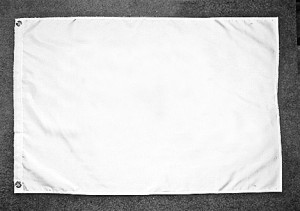 The anthem will be based on the original score created by John Lennon in 1971. https://www.youtube.com/watch?v=XLgYAHHkPFs

The song sung as a collective of territories. https://www.youtube.com/watch?v=VlxI2fAUymw

Examples of remix of this song: 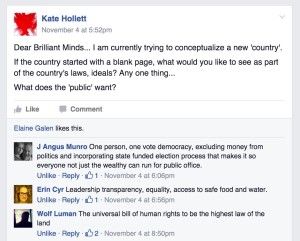 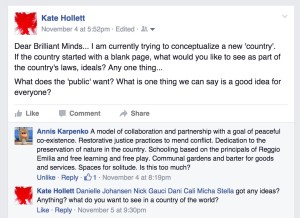